Will My Baby Be Taken Away From Me at the Hospital?

There are a number of reasons CPS can take your child away, and fetal exposure to alcohol or illegal drugs is near the top of the list. To date, no US states have mandated universal testing of newborns for illegal drugs. The testing of newborns is also a controversial issue in all states. But also keep in mind that an estimated 90-95% of babies exposed to alcohol or illegal drugs before birth do not have that exposure detected when they are born, and thus pretty quickly go home with their parents. So, is prenatal drug exposure considered grounds for removing a child from a home, or taking them away at the hospital? As of 2011, the answer is yes in 27 out of 50 states. The reasons CPS takes children vary, but they will look unfavorably on anything that might threaten a child’s health.

Do you need help with a drug addiction? Are you worried about someone else? If you have more questions or someone you love needs more information, please call us at 385-327-7418.

Using drugs while pregnant can cause many problems. For example:

Taking drugs during pregnancy can also cause other complications:

Children whose mothers used during pregnancy can also have a variety of issues later in life, including:

Using illicit drugs while pregnant increases many risks for mother and child alike. It increases the mother’s risk for anemia, blood and heart infections, skin infections, hepatitis, and several other infectious diseases. This includes sexually transmitted diseases, many of which are bloodborne and can be transmitted by contaminated needles. Additionally, most drugs that enter the bloodstream can pass through the placenta and get to the baby. Using illicit drugs that cause substance dependence and addiction in the mother can also cause the baby to become addicted while in the womb. Different drugs can cause different things to happen to the baby. Marijuana use has been linked to cognitive and behavioral problems in the baby later in life.

Are you worried about the risks associated with addiction and pregnancy? Then call us today. We will be able to help you start a new path to sobriety. Do not risk your child, call us, and get the help you need today.

Cocaine use can lead to possible miscarriage, preterm delivery, premature detachment of the placenta, high blood pressure, and stillbirth. Babies born to mothers who use cocaine are more likely to have a low birth weight. They may also have an increased risk of SIDS (Sudden Infant Death Syndrome). Effects of cocaine on the developing child may include growth defects, hyperactivity, behavioral problems, and learning problems.

Using other drugs such as dextroamphetamine and methamphetamine can also cause miscarriage and preterm birth. The newborns that have been exposed to these drugs during pregnancy often show signs of withdrawal, jitteriness, trouble sleeping, and trouble feeding. These babies may also be at a higher risk for SIDS, as well as suffering from tremors and muscle problems later on in life.

Heroin and other opiates such as methadone can cause severe withdrawal in the baby. Sometimes the symptoms can last for many weeks; these babies are also at a higher risk for apnea where they stop breathing. However, if a mother stops taking illicit drugs within her first trimester then she highly increases her chances of having a healthy baby. Are you worried about losing your baby because of your addiction? Call us today, and we can help you get into treatment. Start your new journey today.

Keeping Your Child Safe From Drugs

Be sure to talk to your healthcare provider if you are using or trying to quit drugs when attempting to get pregnant or while you are pregnant. If you use heroin or other opioids or prescription drugs, do not stop taking them without getting treatment first. Quitting suddenly or cold turkey can cause more severe problems for you and the baby, including death. Your doctor will provide you with a treatment plan to help you gradually reduce your dependence on the drug in a way that is safe for both you and your child. Your doctor may treat you with methadone or buprenorphine to help do this safely.

Neonatal Abstinence Syndrome (in which babies go through withdrawals after birth) is fortunately very treatable and as such has not been linked to long term adverse consequences. Nonetheless, it is on the list of reasons CPS can take your child; the best defense here is to show that you are in treatment and doing your best to provide a stable home environment.

Substance Use During Pregnancy is a Crime

Hundreds of pregnant women have been accused of child abuse (among other crimes) due to their newborn testing positive for controlled substances. Laws on drug testing mothers and their newborns vary; however, the stakes are high if the test comes back positive. In some places, mothers may lose their baby or be arrested — possibly even if the drug was prescribed by a doctor. Now we will go over state laws to help mothers better understand what the hospital and the state can do if a child is found to have been exposed to drugs upon birth.

The following states have classified substance abuse during pregnancy as a crime:

Tennessee is the only state that has an actual statute that makes it a crime to use drugs while pregnant. In Alabama and South Carolina, they allow prosecution of pregnant women that use drugs, as well as new mothers that were using, under child endangerment and chemical endangerment laws. All other states say that substance abuse during pregnancy is not a crime. Call us today if you need help with addiction. If you are struggling we can help you get on the right treatment path for you.

However, since 1973 authority figures have tried to charge women in at least 45 different states for exposing their unborn children to drugs. These efforts continue against mothers even in states where high courts have rejected the prosecution approach as we discussed above. Again, only the three states mentioned have official laws against using substances during pregnancy, but it hasn’t stopped prosecutors from trying to use other laws against mothers with substance issues.

The only states that have not tried to charge women for using drugs while pregnant are the following:

Substance Abuse. Is it Child Abuse?

Many of the prosecutions mentioned were in states that say substance abuse during pregnancy counts as child abuse. There are 18 states that have laws to this effect:

Does it Warrant Civil Commitment?

There are a couple of states where substance abuse during pregnancy is grounds for a civil commitment. This means that women who use drugs during pregnancy can be involuntarily committed to a treatment program. In other words, they can be put into a treatment center without their own consent. Those states are;

Wisconsin, however, is special in its law. The law is a bit barbaric in what they are allowed to do in the case of a mother using drugs while she is pregnant. Not only can they force the mother into a treatment center against her own will, but they also detain the mother for the duration of her pregnancy. This state also provides the fetus with its own lawyer, and the mother can lose custody of her baby after its birth. Records of these proceedings are also mostly kept sealed. Are you struggling with addiction? Are you pregnant and struggling? Do you know some that is? Then call us today. We can help you get the treatment that is needed in order to get you back on the right track.

There are fifteen states that require your doctor or other healthcare workers to report it to authorities if they suspect a pregnant woman is abusing drugs. Most states have no specific law, but the ones that do are quite strict. If a healthcare provider has a suspicion that a pregnant woman is using drugs for the duration of her pregnancy they are required to make a report and to tell authorities of their suspicion. Those states are:

However, not all of those same states require testing to prove that suspicion. Most states do not actually have a law that requires hospitals to test newborns and new moms for controlled substances and other drugs. Oddly, this includes most of the states listed above: very few states requiring reports ask that health officials confirm their suspicions with a drug test. The states that require a drug test if the healthcare worker is suspicious are the following:

At the moment, no state has actually mandated universal testing of newborns for illegal drugs, and testing newborns is a controversial topic as well. For the time being substance use during pregnancy and during motherhood is both a public health and criminal justice concern. There are plenty of negative health concerns that were discussed above that are associated with substance use and impact both the mother and the child. Any of these are potentially on the list of reasons CPS can take your child away; however, the question of “what does CPS need to remove your child” can have a variety of answers depending on the state. CPS guidelines for child removal are matters of state law and internal regulation in the agency.

Meanwhile, there are ongoing attempts to criminalize substance use during pregnancy. These put women that use drugs when they are carrying at risk of being caught, arrested, and punished to the fullest extent of the law. Do not risk the life of a child. Call us today, and we will help you get the treatment that you need. Do not hesitate. Start your journey to a happier and healthier life now. 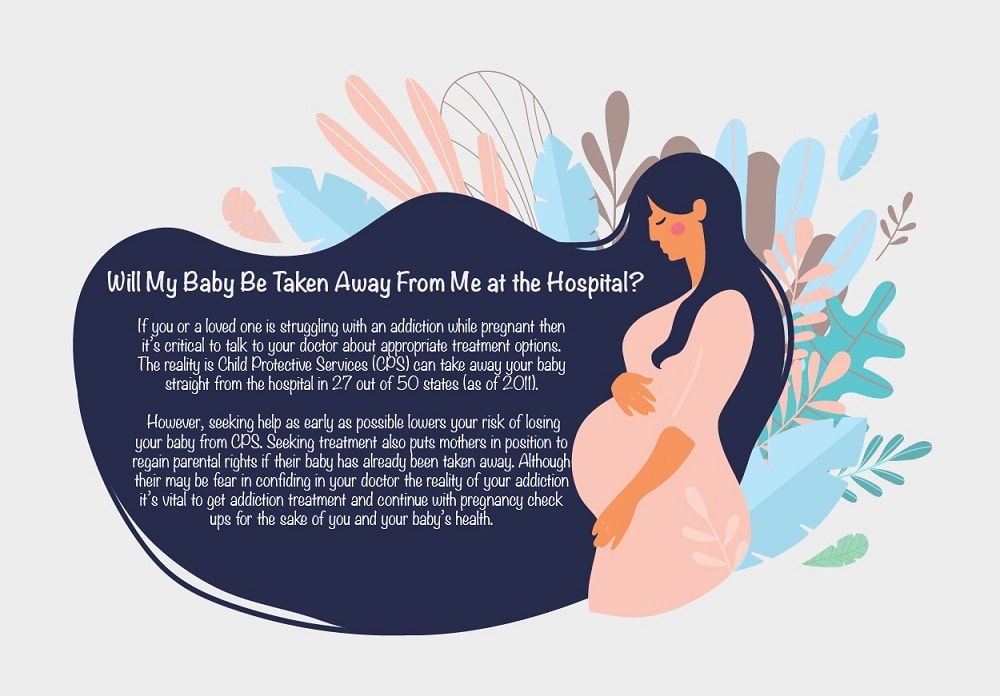 What Should I Expect When Going to Rehab? Is It Time to Hire an Interventionist?

I Can’t Live Without Pain Meds

Talk to us today. We can help you find treatment no matter your situation.