More than 23 million people over the age of 12 are addicted to alcohol and other drugs. Some teens try alcoholic beverages only a few times and stop. When teens can’t control their cravings for the substance, it turns into alcohol abuse. Alcohol is also a leading cause of teen death or injury related to car crashes, suicides, violence and drowning. Each year, almost 2,000 people under the age of 21 die in car crashes in which underage drinking is involved. In 2010, 26% of drivers 25-20 years of age who were killed in motor-vehicle crashes after drinking and driving were not a wearing seat belt. 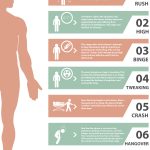